PPID - Need to know
Symptoms of PPID
How is PPID diagnosed?
How is PPID treated?
​PPID and laminitis
PPID case studies (in research)
Frequently Asked Questions
Further information on PPID
Blood tests are baseline ACTH at any time of year, or TRH stimulation of ACTH between January and June (between July and December the TRH stimulation of ACTH may rule out PPID).  Other reasons for increased ACTH (stress, pain, excitement, sedation, travelling ...) must be taken into account when interpreting ACTH results, and ACTH results must be interpreted using seasonally adjusted reference ranges, as ACTH levels increase in all horses in the autumn.  Note that an equivocal or grey area exists between a likely negative and positive diagnosis of PPID when interpreting ACTH results.

PPID is treated with pergolide, given daily.  Pergolide is available for horses as Prascend, Pergoquin, Pergoscend, Bova pergolide paste or compounded pergolide (depending on country).  The correct dose for an individual horse is based on response of clinical signs and blood ACTH concentrations.  The lowest possible dose that controls clinical signs should always be given.

More information: The Equine Endocrinology Group Recommendations for the Diagnosis and Treatment of PPID (2021).

Early signs of PPID are often variable and subtle and can be considered "normal" signs of aging - see Video comparing PPID symptoms and normal aging.  Horses may show only one, or any combination, of the clinical signs of PPID.  Symptoms vary considerably between different horses, at different stages of the disease, and at different times of the year.  PPID is a progressive degenerative disease, meaning that symptoms are likely to increase and worsen with time if the disease is not treated.  Early recognition of the symptoms leading to diagnosis and starting treatment can increase both the quality of life and the life expectancy of the horse. 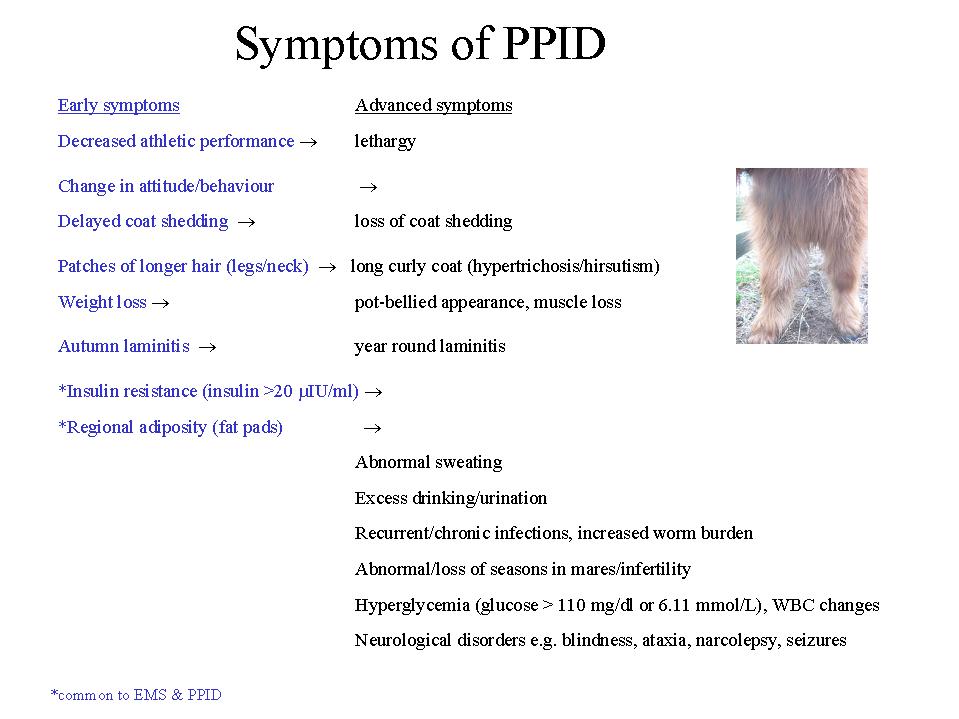 Click on the image for large screen view of early & advanced symptoms of PPID
Clinical symptoms:

Changes in hair coat - often starting with shaggy hair on the legs/face/neck or changes in coat colour → long curly coat that fails to shed (hirsutism/hypertrichosis).  Hirsutism is diagnostic of PPID, but is not apparent in the early stages of the disease.  See Hirsutism p 98.
Excessive sweating (hyperhidrosis) - often patchy sweating, often on stomach or just one side.  NB failure to sweat (anhidrosis) is sometimes seen.  See Hyperhidrosis p 99.
Anhidrosis and heat stress may be seen in horses with PPID in hot humid conditions (Spelta and Axon 2012)

* symptoms of insulin resistance, common to both PPID and EMS

Note that clinical signs may be vary between geographical locations:

How is PPID diagnosed?

​The diagnosis of PPID is not straightforward.  The slow progressive neurodegeneration means that the horse is likely to be ill before blood tests confirm PPID, and our lack of understanding of the disease makes it difficult to validate existing or potential diagnostic tests.  Comparing current blood test results to histological changes in the pituitary gland has shown that mild and moderate (grade 3 and 4) changes are often present in the pituitary gland before blood tests become positive.   Early symptoms often go unnoticed, and vary greatly between horses.  A positive blood test appears to be diagnostic of PPID (if seasonally adjusted reference ranges are used), but a negative blood test does not necessarily mean that the horse does not have PPID.  Although laboratories set cut-off values for diagnosing PPID, there may be a grey area either side of the cut-off value, and the clinical symptoms must always be considered along with the diagnostic test results.
For advanced cases of PPID the clinical signs and presence of hirsutism (long curly coat which sheds abnormally) can be sufficient for a diagnosis.  However hirsutism is often one of the last signs to appear.  Dianne McFarlane has suggested that PPID is a clinical syndrome of different causes, therefore it is unlikely that one testing method will be best in all cases (source: Vet Clin North Am Equine Pract. 2011 Apr;27(1):93-113 Equine pituitary pars intermedia dysfunction McFarlane D).

Two blood tests are commonly used to diagnose PPID (please see the individual tests for instructions):
ACTH test (resting plasma ACTH concentration) - no risk of  laminitis, advisable for monitoring pergolide dosage, single vet visit and blood draw, can be used at any time of the day and year and is the only reliable test during the autumn seasonal rise (if a seasonally adjusted reference range is used).
Dexamethasone Suppression Test (DST) - possible risk of laminitis, doesn't specifically measure ACTH reduction due to pergolide, more expensive as requires two vet visits (unless the owner administers the dexamethasone), cannot be used during the autumn seasonal rise.

The TRH stimulation test, testing ACTH (not cortisol), may be useful when ACTH or DST results are borderline or unexpected (i.e. if a horse with physical symptoms tests negative for PPID).  ACTH is tested before and soon (10 mins or 30 mins) after injecting 1mg TRH.  Retesting resting ACTH during the seasonal rise (August - October northern hemisphere) may be just as useful.

General protocols for testing.  Check protocols with the laboratory being used.
Resting plasma ACTH concentration
Dexamethasone Suppression Test (DST) testing cortisol
Administer 40 µg/kg bodyweight dexamethasone I.M. or I.V. (20 mg for a 500 kg horse) (this can be administered I.M. by the owner to save a vet visit).
Collect blood into a dry tube 19 hours later and test for cortisol.
Diagnosis of PPID: cortisol >27 nmol/l or >10 mg/ml

Supporting blood tests - provide more information about the state of the horse's health but are NOT diagnostic for PPID:
Glucose - horses with PPID may have glucose concentrations above the normal range (hyperglycaemia).
Insulin - horses with uncontrolled PPID will often have insulin concentrations above the normal range (hyperinsulinaemia/insulin resistance).
See the "How is PPID Diagnosed" video at www.prascend.co.uk

Diagnosis of PPID and IR (ECIRhorse)

Diagnosis and treatment of equine cushing's syndrome - C McGowan - The Veterinarian Feb 2005
"Basal ACTH is the best option for a basal diagnostic test."

Are the blood tests for PPID 100% accurate?
No - none of the laboratory tests for PPID are 100% accurate, and there is currently no reliable test for detecting PPID in the early stages.  Clinical signs should always be considered as well as laboratory results.
Some horses show clinical signs of PPID but repeatedly test negative ("some horses with PPID have basal concentrations of ACTH within reference limits" - Beech et al. 2011).  In these cases:
- a trial of Pergolide could be considered;
- ACTH could be retested, ideally during the seasonal rise (usually August - October in the northern hemisphere);
- a TRH stimulation test, testing ACTH, could be carried out (but probably not during the seasonal rise).

What can cause a false negative result?

What can cause a false positive result?

What is the difference between the diagnosis of PPID and EMS?
PPID and EMS do share some clinical symptoms (e.g. regional adiposity, increased appetite, laminitis) particularly as many horses with PPID also have insulin resistance/hyperinsulinemia.
Increased ACTH indicates PPID.
Increased insulin could be either PPID or EMS.
Increased glucose is more likely to be PPID.

How is PPID treated?

Pergolide, a dopamine agonist, is the drug most vets prescribe to control PPID.  Pergolide acts to replace the dopamine missing in horses with PPID, inhibiting the over-production and release of the POMC-derived hormones, α-MSH, β-endorphin, CLIP and ACTH.

What dose of Pergolide should be used?
The correct dose of Pergolide is the lowest effective dose - i.e. as little as possible, but as much as necessary to control the clinical symptoms and ACTH (plus perhaps also insulin, other POMC-derived hormones and glucose) concentrations.  Different horses need different doses.  Most horses start on 1 mg - 1.5/2 mg per day (ponies 0.5 mg - 1 mg), but some horses need 7mg - 8mg per day to control their symptoms, rising to 10mg per day during the seasonal rise (anecdotal).

Are there any side effects of using Pergolide?
From the NOAH datasheet for Prascend:
"Potential adverse reactions in horses include inappetence, transient anorexia and lethargy, mild central nervous system signs (e.g., mild depression and mild ataxia), diarrhoea and colic. If signs of dose intolerance develop, treatment should be stopped for 2-3 days and then reinstituted at one-half of the previous dose. The total daily dose may be then be titrated back up until the desired clinical effect is achieved, increasing in 0.5 mg increments every 2-4 weeks."

J Vet Med Sci. 1997 Aug;59(8):707-10 (PubMed) (Full paper)
A case of a pony with Cushing's disease
Okada T, Yuguchi K, Kiso Y, Morikawa Y, Nambo Y, Oikawa M, Sasaki F
"The pars intermedia of the pituitary gland, and plasma ACTH and cortisol levels in the pony, which was first diagnosed in Japan as indicating equine Cushing's disease, were examined by immunohistochemistry and radioimmunoassay, respectively. The pars intermedia was greatly enlarged and most of its cells were immunoreactive for antisera to both adenocorticotropic hormone (ACTH) and beta-endorphin (beta-End). The plasma ACTH level was elevated when clinical symptoms appeared. The present results reveal that equine Cushing's disease in this pony was induced by the hypersecretion of ACTH and beta-End from the enlarged pars intermedia of the pituitary gland."

​PPID and laminitis risk​
​PPID - findings at post mortem
PPID and breeding
​ACTH interpretation
​PPID and Parkinson's Disease
Incidence of PPID
​​How should pergolide /Prascend be introduced?
​What is PPID?
Pituitary stress hormones
Does a high ACTH result mean my horse has PPID?
What causes PPID?
Can any horse get PPID?
Temperament changes with PPID/pergolide

Does Your Horse Have PPID?  www.thehorse.com April 2020 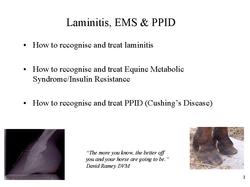