EMS is not a disease, but a term used to describe a horse that shows risk factors associated with an increased risk of developing  hyperinsulinemia-associated (endocrinopathic) laminitis - the most common form of laminitis.  All horses with EMS have insulin dysregulation (ID), and often are overweight and/or have abnormal fat pads.  EMS is influenced by genetics and management, with easy-keeper breeds needing stricter management.

Insulin dysregulation can mean hyperinsulinaemia (above normal insulin) at baseline or after normal feed or an oral sugar challenge, or tissue insulin resistance.  ID can also be associated with corticosteroid use, PPID, some illnesses, pregnancy, stress and starvation.

More information: The Equine Endocrinology Group Recommendations for the Diagnosis and Treatment of EMS (2020).

What is Equine Metabolic Syndrome?

Nicholas Frank published a review of EMS in 2011:
Frank N
Equine metabolic syndrome
Vet Clin North Am Equine Pract. 2011 Apr;27(1):73-92 (PubMed)
"EMS shares some of the features of MetS, including increased adiposity, hyperinsulinemia, IR, but differs in that laminitis is the primary disease of interest."

What is Insulin Resistance?

Insulin resistance can be defined as the inability of normal insulin concentrations to stimulate tissues to uptake glucose.

When a horse eats foods containing sugar or starch, glucose enters the blood, and this stimulates the pancreas to release insulin.  When insulin attaches to insulin receptors, found on many cells in the body (muscle, fat, liver, heart), glucose is able to leave the bloodstream and enter the cell.

With insulin resistance, the cells become resistant to insulin - the normal amount of insulin no longer gets the job done, and therefore the pancreas has to compensate by releasing increased amounts of insulin to move the glucose into the cells, to prevent blood glucose levels becoming too high (hyperglycaemia). 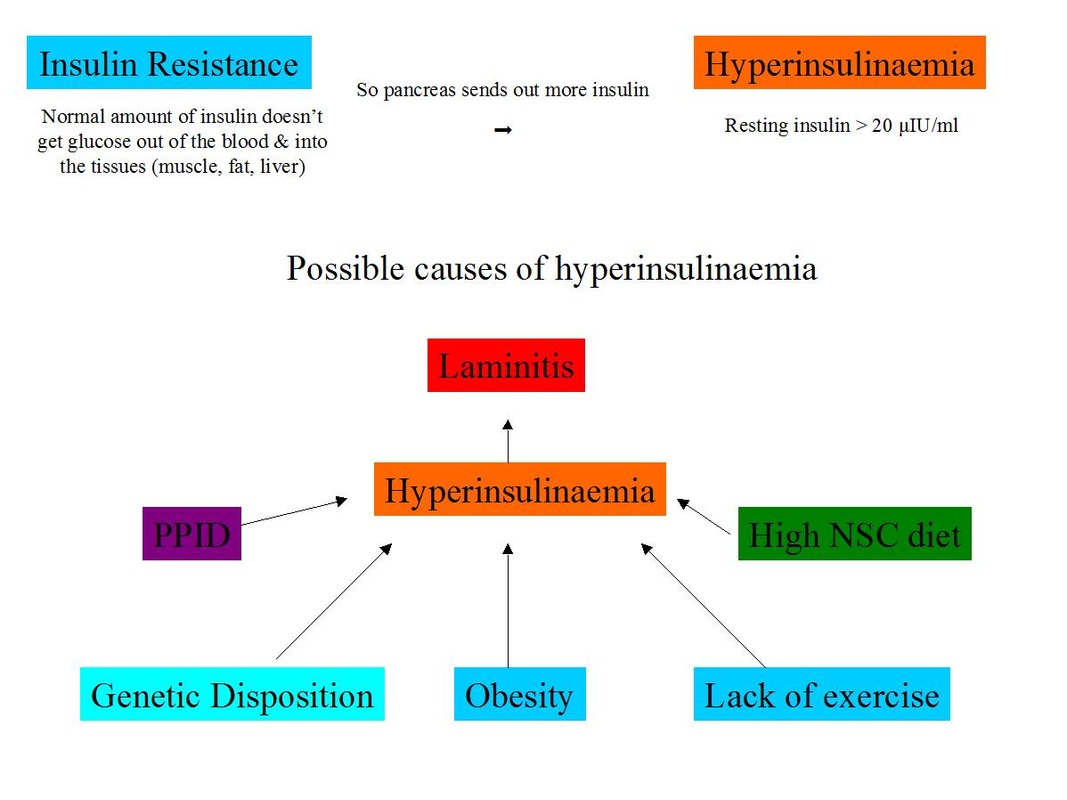 What is the difference between EMS and PPID?
Horses with both EMS and PPID can have regional adiposity, hyperinsulinaemia and laminitis.  Horses with PPID are often, but not always, insulin resistant.   With PPID, it is the loss of dopamine producing neurons that ultimately leads to hyperinsulinaemia.  With EMS, it is likely that obesity, lack of exercise, genetics and diet can all lead to hyperinsulinaemia. Testing for PPID using the resting ACTH concentration should differentiate between a horse with EMS only and a horse with PPID (although tests are not 100% accurate).  This is important because a horse with unrecognised PPID that is being treated only for EMS is unlikely to improve significantly without pergolide.  There is currently no reason to think that a horse will benefit from pergolide if it has EMS but does not have PPID.

How is Insulin Resistance/EMS diagnosed?

To fast or not?
The ACVIM consensus statement on Equine Metabolic Syndrome suggests a fasting protocol:
Feed 1 flake of low NSC hay no later than 10pm the night before testing,
Collect blood between 8 am and 10 am the following morning - this should ensure a 6 hour period of fasting.
Measure glucose and insulin concentrations.

Interpreting results
Insulin - fasting insulin is generally considered normal below 20 µIU/ml (138.9 pmol/l) (normal ranges can differ between laboratories using different assay methods - using a laboratory with widely accepted normal ranges can avoid confusion).  Therefore a fasting insulin concentration > 20 µIU/ml (138.9 pmol/l) is diagnostic of insulin resistance.
Horses with insulin resistance can have a normal resting insulin concentration.  If there is reason to suspect IR/EMS but a basal insulin test is normal, dynamic testing should be considered.
Hyperinsulinemia can be caused by stress, pain, recent feeding.  Insulin concentrations are likely to be raised in a horse currently suffering from laminitis, therefore insulin testing should ideally be delayed until the pain and stress have lessened.

Glucose - fasting glucose should be inside the laboratory's normal range (e.g.< 110 mg/dl (6.11 mmol/l)).
Hyperglycemia is rarely found in horses with insulin resistance, although glucose concentrations are often towards the high end of the normal reference range.  Hyperglycemia may indicate Type 2 diabetes mellitus or PPID.
Hyperglycemia can be caused by stress, pain, recent feeding, some drugs and inflammatory processes.

2. Dynamic testing - carried out when screening tests are inconclusive
In a hospital setting, the Combined Glucose-Insulin Tolerance Test (CGITT) may be used.

More commonly the oral sugar/glucose test (OST/OGT) is used.
1 flake of low NSC hay is given no later than 10pm the night before testing.
The following morning the owner gives the horse an agreed amount of glucose/dextrose - e.g. in the UK a chaff feed is often given with 1g/kg bodyweight glucose or dextrose, in the USA 0.15 ml/kg bodyweight Karo Light Syrup (corn syrup) is given (this can be syringed directly into the horse's mouth).
60 - 120 minutes later the vet draws a sample of blood to test insulin and glucose concentrations.

Interpreting results:
Depending on the laboratory, Insulin > 60 or 85 µIU/ml may be considered diagnostic of insulin resistance for the OST/OGT.

As with screening tests, pain, stress and recent feeding will affect results and should be avoided.

1.  Weight loss if the horse is overweight/obese.
2.  Low sugar/starch diet and exercise to increase insulin sensitivity.
3.  In some cases medical treatments are advised.

Morgan RA, Keen JA, McGowan CM
Treatment of Equine Metabolic Syndrome: a clinical case series
Equine Veterinary Journal published online March 2015
Owners of 19 horses with EMS but not PPID, 17 of which had a history of laminitis, were given individually tailored diet and exercise programmes to follow for 3-6 months.  A reduction in body condition score was seen in all horses (from median 4.5/5 to 3/5); a reduction in bodyweight in 18/19 horses (average from 400 kg to 397.4 kg); and reductions in resting insulin seen (from average 33.71 to 9.82 mIU/L.
Conclusion: A diet and exercise programme individually tailored and carried out by the owner results in weight loss and improvements in insulin sensitivity.

Insulin Resistance - What Is It and How Do We Measure It? - Stephanie Valberg & Anna Firshman

Online courses with Dr Eleanor Kellon VMD in Cushing’s and Insulin Resistance, nutrition (NRC plus) and other subjects useful to owners of laminitic horses
Useful resources for EMS/ID

Archived webcasts from the University of Minnesota: 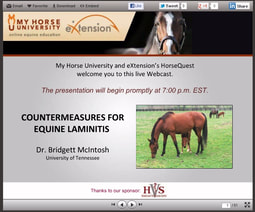 Click on the image for a presentation by Dr Bridgett McIntosh on Countermeasures for Equine Laminitis.

Click on the image for a 28 minute talk on Equine Metabolic Syndrome by Dr Nicholas Frank
1 hour webcast by Dr Ray Geor on Equine Metabolic Syndrome - My Horse University, Michigan State University
The term equine metabolic syndrome (EMS) is used to describe the clustering of obesity (and/or regional accumulations of fat), insulin resistance and increased susceptibility to laminitis in horses and ponies. In fact, EMS is now regarded as the most common cause of laminitis. This presentation will review the clinical features, diagnosis and medical management of EMS, and discuss dietary and exercise measures for mitigation of laminitis risk in affected animals.  (From 2011 or 2015?).