NSC in grass and hay

Pelletier et al. (2010) has shown that freezing can lead to an increase in NSC compared to samples placed directly into the dryer.

​P. Udén
The influence of sample preparation on the level of soluble and non-structural carbohydrates in forage crops and silages
Proceedings of the 1st Nordic Feed Science Conference 2010

The above papers (Prince 2016 and Kramer 2021 are linked to:
Prince, Kelly Joan MSc thesis 2017 University of Kentucky
Evaluating nonstructural carbohydrate variation of cool-season grasses based on genotype, management and environment

Richards N, Bailey SR, McGilchrist P
Seasonal variation in non-structural carbohydrates in pastures grazed by Australian Thoroughbreds
Presented at the 8th European Workshop for Equine Nutrition June 2016 held in France.
​
The graphs below represent mean values of 351 pasture samples collected throughout the year from Feb 2011 until Sept 2015 from 220 paddocks in the Hunter Valley, NSW, Australia, a Thoroughbred breeding area.  The samples were dried and sent to Equi-Analytical, for NIR analysis.  Laminitis in grazing Thoroughbred broodmares was reported to be a significant issue in this area, with the highest incidence of laminitis in the spring.  The paper concludes "Of considerable interest is the fact that the only major difference between winter and spring was in the WSC content, suggesting spring pastures are significantly higher in fructan."

TLS comment:
Sugar+starch combined (hydrolyzable sugars) are greater than 10% (the limit suggested by the ECIR group) in the spring and winter - half the samples would be above the average shown in the graphs.
Spring grass will be low in fibre, so horses are likely to and able to eat more. Research in cows found a correlation between volume ingested and high simple sugar levels (see Mayland et al 2000 below).
In-foal mares may be subject to gestational insulin resistance.
Fructan may be higher in spring than in winter, but the % of fructan is low compared to ESC, and ESC+starch.
The higher incidence of laminitis in the spring is likely to be the result of increased insulin resistance due to pregnancy, combined with the high level of hydrolyzable sugar+starch and possibly increased intake of grass in its vegetative, rather than mature, stage of growth. 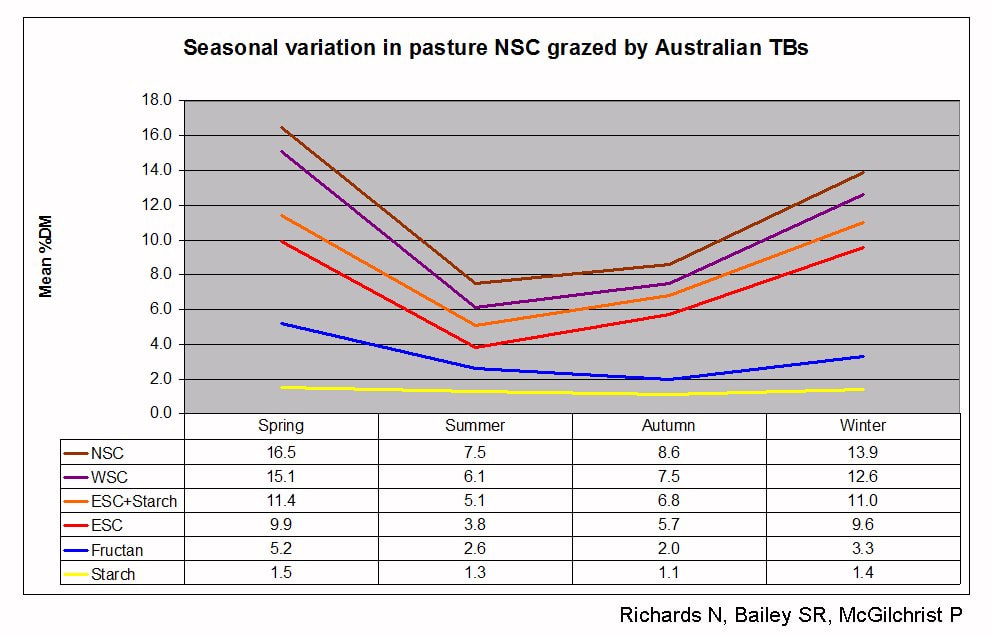 Note that ESC appears to be the dominant influence on WSC and NSC. 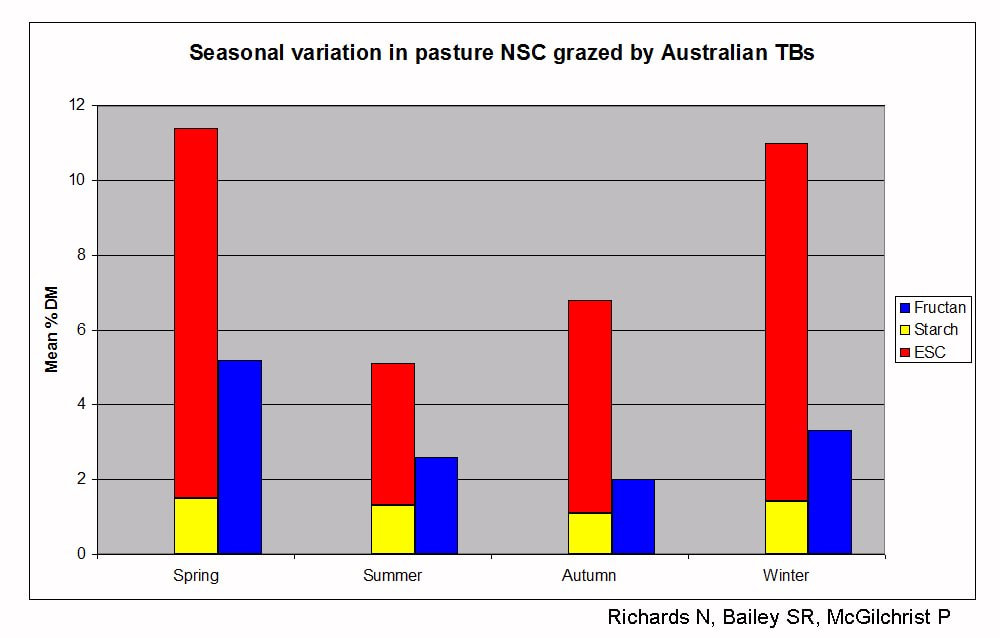 The grass contains far more sugar+starch than fructan at all times of the year.
To try to give these levels of sugar and fructan some perspective in relation to laminitis risk, we hypothetically took the median previously laminitic (therefore insulin dysregulated) pony from research by Borer et al 2012, and put it on Richards' grass in the spring (the pasture with the highest NSC), eating 2.5% of his bodyweight per day, which should reflect some gorging on lush, sweet spring grass. 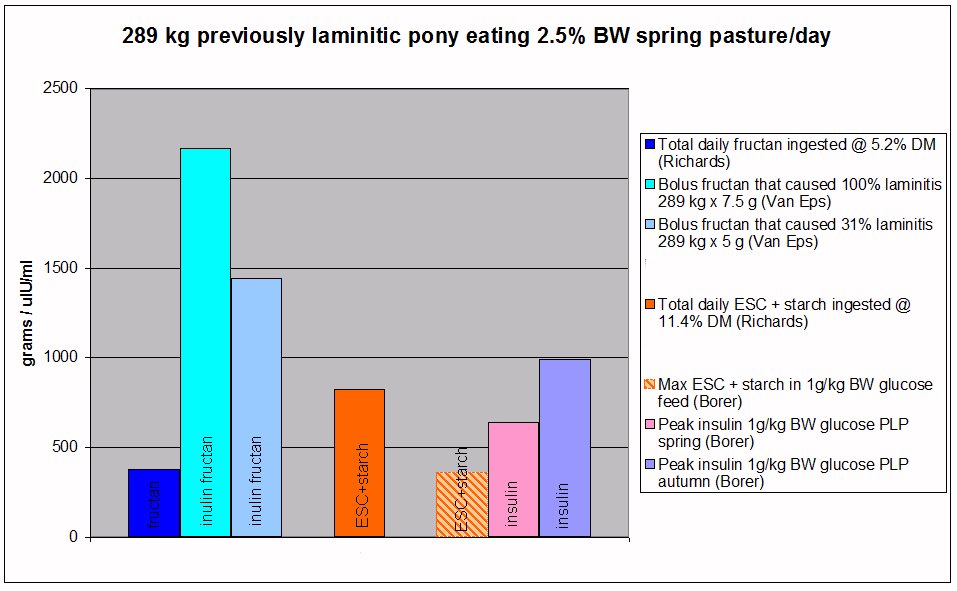 Obviously, this is far from being a perfect comparison - apart from being hypothetical, there's likely to be little value in comparing natural grazing of fructan and sugar+starch over 24 hours with nasogastric bolus or bucket administration, but researchers have been using the nasogastric bolus administration of fructan as a potential model for naturally ingested fructan for years, so we would suggest our model is just as good!

As you can see, even with our pony eating 2.5% of his bodyweight in spring grass per day, the fructan levels he's eating don't come anywhere near the amount of inulin (a short-chain fructan) given in one bolus by nasogastric tube, even at the lower rate of 5 g/kg bodyweight that caused laminitis in only 5 out of 16 horses experimentally.

However, the amount of simple sugars (ESC) and starch he eats per day is more than double that which, when given in a single bucket feed, caused insulin to rise to over 500 uIU/ml in the spring, and nearly 1000 uIU/ml in the autumn.  The minimum level of insulin that causes laminitis isn't known, but Melody de Laat found lamellar pathology in all horses that had experimentally induced insulin levels of around 200 uIU/ml for 48 hours, and Walsh et al 2009 found that the onset of laminitis was associated with hyperinsulinaemia > 100 uIU/ml.
Kagan IA, Lawrence LM, Seman DH, Prince KJ, Fowler AL, Smith SR
Effects of sampling time, cultivar, and methodology on water- and ethanol-soluble carbohydrate profiles of three cool-season grasses in central Kentucky
JEVS published online Nov 2017
See also
Prince, Kelly Joan MSc thesis University of Kentucky 2017
Evaluating nonstructural carbohydrate variation of cool-season grasses based on genotype, management and environment

Sucrose was the primary component of NSC.  Monosaccharides and disaccharides accounted for an average of around 45% of NSC, with a range of 33 to 58%. 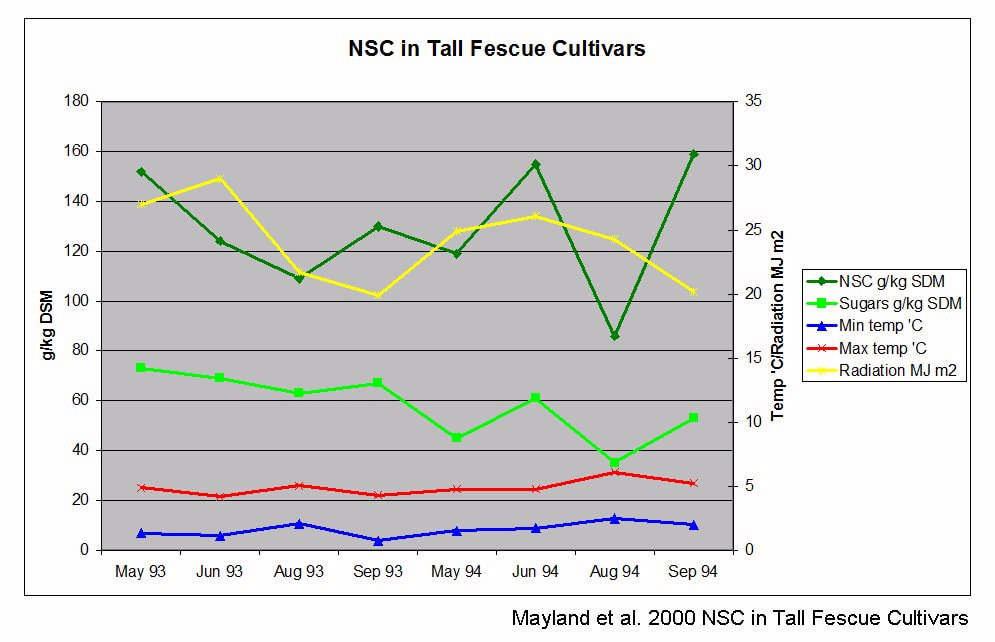 Moore-Colyer MJS, Taylor JLE, James R
The Effect of Steaming and Soaking on the Respirable Particle, Bacteria, Mould, and Nutrient Content in Hay for Horses
JEVS April 2016 Volume 39, Pages 62–68
Deepdyve
Samples taken from 30 small bales from a range of meadow (permanent pasture, several grass species) and seed (perennial rye grass) hays collected from all over the UK and considered representative of the UK hay harvest in 2009
had mean WSC of 12.6% on an as fed basis (range 6.2% - 20.2%), measured by the phenol-sulfuric method (Dubois et al. 1956).  Estimating a DM content of 88%, this would be 11.09 % WSC on a DM basis.  Starch, ESC, DE, DM not given.

Müller CE, Nostell K, Bröjer J
Methods for reduction of water soluble carbohydrate content in grass forages for horses
Livestock Science Volume 186, April 2016, Pages 46-52
The effect of 1. conservation method (hay, haylage, silage); 2. using bacterial inoculants (in haylage and silage); 3. storage time; and 4. soaking was measured on WSC.
WSC was the sum of glucose, fructose, sucrose and fructans were analysed using an enzymatic-spectrophotomectric method.
Grass was harvested as silage @ 40% DM, haylage @ 60% DM and hay @ 84% DM.  Silage had lower glucose, fructose and WSC than haylage and hay; hay had more sucrose and fructans than silage and haylage.
Forages were sampled after 3, 6, 12 and 18 months storage - length of storage time did not affect WSC.
Forages were soaked for 12 and 24 hours in water.  Soaking for 12 hours reduced fructose and WSC in silage by ~50%.  Soaking for 12 hours reduced glucose, fructose and WSC in haylage by ~50%, no further losses occurred after soaking for 24 hours.  Soaking for 12 hours reduced glucose by 50%, fructose by 30%, sucrose by 85% and fructan by 60% in hay, with further losses of glucose after soaking for 24 hours.
WSC was 24 g/kg DM in silage before soaking, and 38 g/kg DM in hay after soaking for 24 hours.