Nutmeg's owner first came to TLS for help in January 2014, just hours before Nutmeg was due to be put to sleep because of rotation following probably years of chronic laminitis.  The story of Nutmeg's first reprieve from euthanasia can be read here.  TLS continued to follow Nutmeg's rehab, but she wasn't making the progress expected and still required daily pain relief.  During the summer it became clear that her trim wasn't quite correcting her feet, her heels were still too high but her collateral groove depths at the apex of her frogs were shallow.

Before and after trimming - little change in the hairline angle suggests the palmar angle hasn't been significantly reduced and there is still rotation.
In July Nutmeg's owner reported that her new vet, having seen the x-rays taken in January, had said that the pedal bones were pointing down to the ground and that nothing could be done about this.  Apparently suggestions were made that Nutmeg had been in pain for years, it wasn't fair to keep her like this, and it was time to "let her go".  More x-rays were needed but weren’t felt to be an option by her owner due to an expensive quote and the worry that they might be misinterpreted by anyone not familiar with laminitis rehabilitation.

TLS knew from photos that Nutmeg's feet had not been fully realigned.  Before making any life or death decisions, it had to be worth getting new x-rays to assess the damage to her feet, and carrying out a realigning trim.  TLS offered to take Nutmeg for rehab, and she arrived, wearing thick pads and boots on a deep supportive bed, at the end of August. 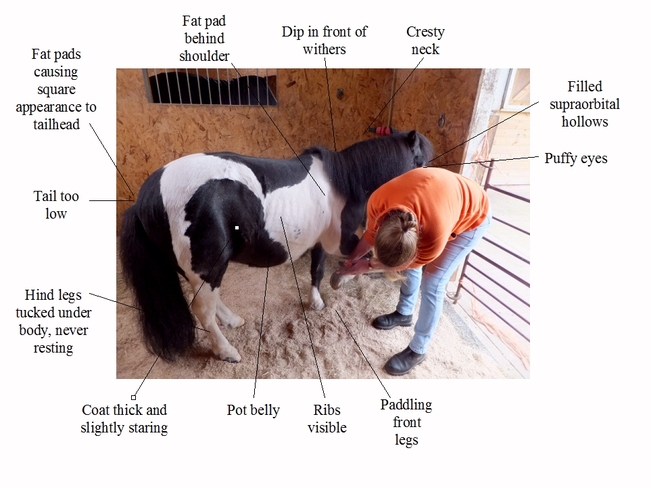 On arrival Nutmeg's PPID/insulin resistance was clearly not fully controlled.  She had a cresty neck with a dip in front of the withers, filled supraorbital hollows and puffy eyes, fat pads behind the shoulders and around the tailhead.  Her ribs were visible despite a thick and slightly staring coat, with a pot belly.  Her hind legs were tucked well under her body, giving her quarters a rounded appearance and making her tail look too low set.  She was paddling slowly with her front legs, and her hind legs never rested.  Although she had walked across the yard reasonably well in her boots and thick pads for a pony that supposedly should be put to sleep, she had a slightly odd gait behind and her back end looked awkward and disconnected from her front end.  She was very cold to the touch along her topline, quarters and legs, and objected to being touched behind the saddle, on her belly and on her hind legs.

Daily TTouch body work sessions and gentle massage were started immediately.
The realigning trim entailed bevelling the toe to the purple line, lowering the heels gradually to the pink line, and bevelling the outer wall so that weight bearing was shared by the well padded and supported solar structures (frog, heels, bars, sole).  Note the area marked yellow had to develop - foot rehabilitation is often about growing hoof just as much as trimming hoof.

Nutmeg often felt cold despite her thick coat, and after appealing for small rugs, TLS was kindly loaned stable rugs and fleeces by Norfolk Equine Veterinary Services.  As Nutmeg's stance improved following the realignment of her feet and regular body and then ground work, it was interesting to note that the initial rugs borrowed became too short by about 12" - her back end was uncurling!

Nutmeg had been on NSAIDs (Danilon) for years, but as she became more comfortable this was slowly reduced and then stopped altogether.  There are significant side effects associated with the use of NSAIDs, and their use should generally be kept to a minimum (see Phenylbutazone).
Once her feet were well on the way to being realigned and she was comfortable off of NSAIDs, Nutmeg began in-hand walking wearing boots and pads, starting with one circuit of a small paddock twice a day, and building up by a lap every day.  Before each walk Nutmeg had a TTouch bodywork session to help warm and relax her muscles, she wore rugs if necessary to keep her muscles warm, and she was monitored closely for increases in digital pulse "boundingness" and any signs of discomfort.  TTouch sessions generally started with feeling Nutmeg's body for hot/cold areas, then a variety of light TTouches including Python Lifts on her legs, Zig Zags across her back and belly, ear work and tail work, and body wraps were used both in the stable and during exercise.
Further x-rays in October showed that Nutmeg's feet were almost fully realigned - the left fore just needed a little more to come off both toe and heels in the next trim.
Many thanks to:
Vets: Norfolk Equine Veterinary Services
Farrier: Daniel Garner
TTouch Practitioner: Amanda Jayne Bell; Consultant: Danielle Dibbens
EDT: James Arkley
Linda
Karen

Can you help with future rehabilitations?