Our aim was to realign the hoof to the pedal bone (P3) as quickly as possible - just as if you break a leg, the bones should be realigned to their healthy pre-injury position.  With laminitis you can't exactly move the bone, so you make changes to the hoof capsule which have the same effect as bringing the bone and foot back to its healthy pre-injury position, in time.  Getting on with the realignment quickly is essential to prevent further damage, as is protecting the foot where necessary (boots and pads generally work well and allow access to the foot for frequent trims).
Armed with the information from the x-rays, Sorrel's farrier carried out a rather cautious first remedial trim, bringing the toe back so that the outer wall was no longer weight-bearing, but not taking much off of the heels.
He returned 2 weeks later and spent a considerable amount of time going through all of the markups and trim suggestions, then worked on Sorrel's feet together with Sorrel's owner and made spectacular progress, beveling the flared walls so that they were no longer fully bearing weight, and bringing the heels down and back so that the frogs became weight-bearing, and significantly increasing the weight-bearing surface at the back of the feet.  After the trim Sorrel's owner reported "she does not look lame at all - it's the first time I can remember that she actually looks ok."
Sorrel's new EasyCare Trail boots arrived for her front feet, fitted with pads and Sorrel was allowed to wander around the grass-free yard outside her stable for initially short but increasing periods.
“Sorrel is doing very well, she went from standing still to a canter to get over her yard to eat a blade of hay which Hugo had left behind. I did tell her you would not be impressed with the sudden movement but it was so good to see her full of life again!”

Looking at before and after photos of Sorrel's feet, her owner said:
"It all fits in now. I thought she had done something to her shoulder after she chased the stray sheep as she went lame on her left leg, corresponding as we now know to the rotation. I was just at wit’s end not knowing what to do to help her as I knew there was a problem but just did not know what.  When we looked at her previous photographs it is obvious to us now that the damage caused in her feet by a laminitis attack some time in the past had not been picked up and corrected.  I’m obsessed by looking at feet now!  The message from Sorrel’s case history is definitely ‘’FEET CARE’’.  In all the literature I looked at over the time when she was not well I just did not pick up on different methods of trimming for a laminitic pony."

Sadly, not all farriers are experienced in rehabilitating chronic laminitis.  But get x-rays, talk through the options with your farrier/trimmer, put the management changes in place, and you can often quickly turn a crippled horse into a happy horse with a good quality of life.

The cause of Sorrel's laminitis, insulin resistance, has been diagnosed and treated with diet, and now exercise will help to increase her insulin sensitivity even more, so that hopefully she will soon be able to have some grass, initially on her track system and/or with a muzzle.  Her feet have been fully supported and have been realigned as far as possible - now it's up to nature to finish the job as a healthy new hoof with tight laminar connections grows down from the coronet.  A further set of x-rays will hopefully confirm this.  Because Sorrel's laminitic episodes have often been in late summer/autumn, we have suggested that it might be worth testing ACTH again in the autumn, ideally September when ACTH levels are likely to be at their peak, and monitoring her insulin levels from time to time will also be a sensible precaution.

Sorrel is making an excellent and speedy recovery, thanks to the commitment of her owners and the willingness of her farrier to take on new ideas.  Their story is an inspiration, and we wish them well.

Many thanks to everyone involved in Sorrel's rehabilitation, especially Liphook Equine Hospital Laboratory, Linda and others who offered advice at ECHoof & Barefoothorsecare. 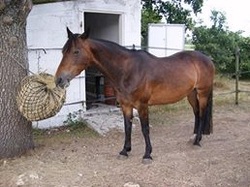 Posted on TLS Facebook August 2013:
"It was the practical down to earth help we so much appreciated and benefited from Andrea of TLS.
We now have a happy and healthy pony after she had suffered from the effects of chronic laminitis for so long. After receiving minimal veterinary assistance, due to where we live, we found we just couldn't get our pony back to full health on our own. We changed everything we could practically do and had just run out of ideas and knowledge. We had got to the stage where we thought she might have to be put down as this seemed to be the ‘solution’ everyone gave.

With Andrea’s guidance and huge worldwide network of like minded people, professional and otherwise, we were guided by her epic messages by e mail (if you have had a message from Andrea you will know what we mean!!!) often composed and sent at unearthly hours of the morning. We were able to identify the cause of her laminitis (she is insulin resistant) and were able to remove the cause of her laminitis (by changing her diet/grazing routine). We were then guided as to how to support and realign her feet so the damage caused by the laminitis and the incorrect trimming of her feet could be grown out and her feet could return to the correct trim.

We continually refer to TLS if we have a question relating to continuing our pony’s ongoing good health as we know we can trust all the information that Andrea has on her site. A huge ‘thank you’ and a ‘neigh’ again to Andrea for all her dedication to everyone out there in the world who are struggling to regain their equines’ health from this condition, Fiona, Mark et Sorrel."
Disclaimer.
Please note the information given above is presented simply as a case study, it is not advice to be followed and does not represent trimming guidelines. We suggest that you always work with a qualified farrier/trimmer, that you always have x-rays taken after an episode of laminitis or if signs of laminitis are present in the feet, and we also suggest always getting an independent second opinion on laminitis rehabilitation footcare (see Support groups specifically for feet).  Every case of laminitis is unique, and what works for one horse may not work for another.