Right fore 16 December 2014
Trimming Misty's feet is going to be very challenging, as the usual guides of frog, hairline, white line just aren't there.  With this extent of damage, rehabilitation is out of the question, the best we can hope for is to make her as comfortable as possible for as long as possible.
The initial aim is to give her as large and as stable a weight bearing surface as possible - "a foot to stand on".
This will involve very slowly lowering her heels, aiming towards restoring the palmar angle to around 5 degrees (indicated by the pink line), but given the length of time her palmar angle has been abnormally high, care must be taken to avoid damaging soft tissues and joints and causing discomfort, and the realignment may not be able to go that far.
The laminar wedge can be reduced to some extent, but keeping in mind that her feet must be protected, and we don't know exactly what path new hoof growth will take.  We're going to have to experiment to find the breakover she is most comfortable with.
To a large extent, the trim is going to be guided by Misty's comfort, not by the x-rays or how her feet look or should look.
Misty's left fore is very deformed and twisted.  As with the right fore we are aiming to improve her weight bearing surface and if possible reduce the twist, but all trimming will be guided by Misty's comfort levels and will involve experimentation and taking things very slowly.
Misty has already had a couple of small trims and treatments for her thrush, and her owner has since reported "Misty seems to be happier and reverting back to the more cheeky side of her!  When she comes in at night there is no resistance like before - once on the flat she walks almost normally, and she seems to be holding herself straighter".
Small trims are being carried out every 3-4 days, and next week Misty will start a programme of physical therapy.  More x-rays are likely to be needed early next year.

Misty December 2014 to March 2015 from thelaminitissite
Misty is a lovely pony, full of character and affection, with a lot of determination and a strong will to live!  She sets herself a strict daily routine, expecting to be let out of her stable by a certain time in the morning, and let back in again at night with her tea ready.  She lies down at much the same time every day, asks to go into the paddock with her close friend chestnut gelding Ziggy as long as the ground isn't slippery from rain, isn't at all phased by having chickens laying eggs and dogs and cats playing under her belly, and loves having children around her.
​
Update 27 November 2015 - RIP Misty 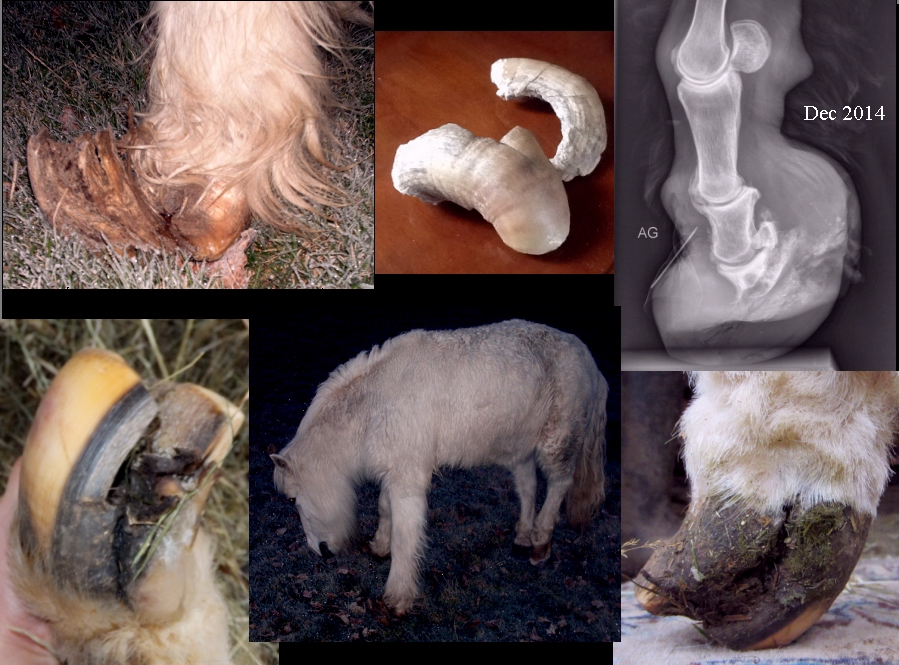 Last December I met the bravest and most cheerful pony I have ever known. After years of neglect, resulting in hideously deformed feet from laminitis, with knock-on effects throughout her body, Misty had come through rescue associations to find a wonderful life with Rosemary.

TLS was called in as Misty had started to show increased signs of discomfort. Together with TTouch practitioner Danielle and vet Alexandre, we worked on making Misty as comfortable as we could - we knew the damage to her body ruled out a full recovery, but she was clearly so happy and content with her new life, and not showing signs of pain. By the spring her feet were much improved and she was walking quite normally; through the summer and mild autumn Rosemary reported that Misty was trotting, climbing banks, playing with her friends, and exploring every corner of her property.

In July Misty started to pass blood in her urine. She showed no signs of illness, and the vet couldn't pinpoint the cause, although a tumour in her urinary system was suspected. Medical treatment appeared to ease the bleeding, and Misty continued to radiate happiness and contentment.

Yesterday I saw Misty for a routine visit. Rosemary reported that in the last week or so she had been less active, not finishing all her bucket feed, and the bleeding had returned - she wondered if we were getting near time to let her go. We had always questioned whether, despite our best efforts, she would be happy through another winter. However, Misty was particularly cheerful, obliging to pick up her feet, snuffling for treats, content to have some TTouch on her legs, and our session finished with a lovely cuddle. My lasting impression as I left her was one of peace.

Misty slipped away last night, quietly in her stable, with her friend Ziggy next door. 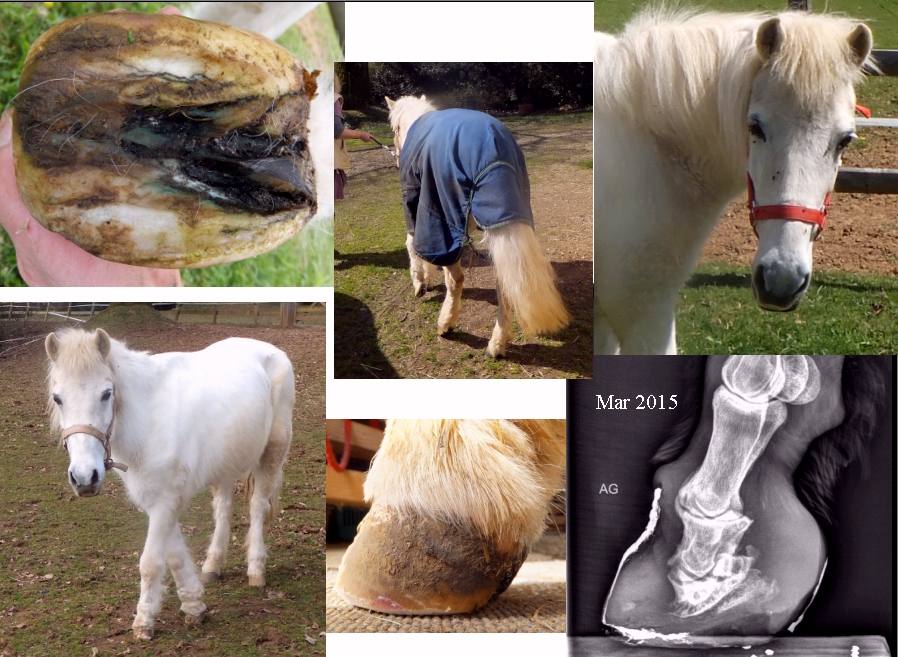 ​If you would like to contribute to the funds spent on Misty's rehabilitation and the rehabilitation from laminitis of other horses and ponies in need, donations can be made through Paypal, by cheque or bank transfer.  Funds raised don't just help the horse undergoing rehabilitation, but also provide information to assist future rehabilitations for horses around the world.